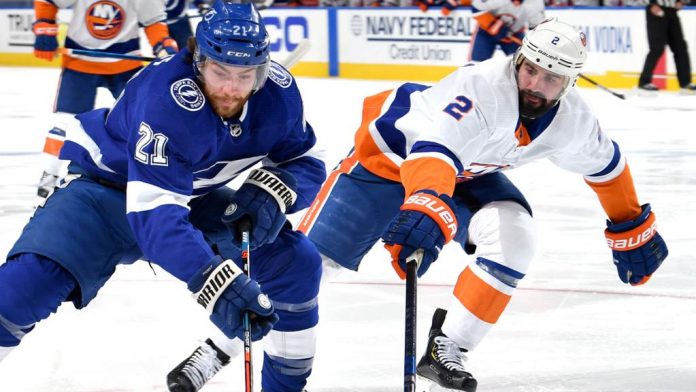 The New York Islanders will try to even the Eastern Conference Final against the Tampa Bay Lightning in Game 4 at Rogers Place in Edmonton on Sunday.

The Islanders lost the first two games but recovered late in the third period for a 5-3 win in Game 3 on Friday in Edmonton, the hub city for the conference final and the Stanley Cup Final.

Lightning center Brayden Point could miss his second straight game. Tied with forward Nikita Kucherov for the Tampa Bay postseason lead with 23 points (eight goals, 15 assists) in 15 games, Point appeared to be injured during the first period of a 2-1 win in Game 2 on Wednesday.

Tampa Bay coach Jon Cooper, speaking prior to practice Saturday, did not provide an update on Point’s status. Video later provided by the nhl showed him participating at practice.

As part of the nhl Return to Play Plan, a team is not permitted to disclose player injury or illness information.

The Islanders came away with the win Friday but were unable to play to their identity for long stretches and traded more chances with the Lightning than they would have liked.

“They like their rush play and obviously they’re highly skilled, so it’s important that we do a good job in the neutral zone and try to take that rush game out of it because that could really hurt you,” New York defenseman Ryan Pulock said Saturday. “We’ve got to find a way to do a little better job, but obviously that was a big win for us.”

2. Ability to bounce back

The Lightning have not lost consecutive games this postseason, including the round-robin portion of the Stanley Cup Qualifiers. They won four straight against the Boston Bruins in the second round after a 3-2 loss in Game 1 on Aug. 23.

Islanders coach Barry Trotz said he knows they have to raise their level to even the series, especially with the expected return of Tampa Bay forward Alex Killorn, who was suspended for Game 3 for boarding New York center Brock Nelson in Game 2.

Trotz said Cizikas, who missed his first game of the postseason Friday, will be a game-time decision.