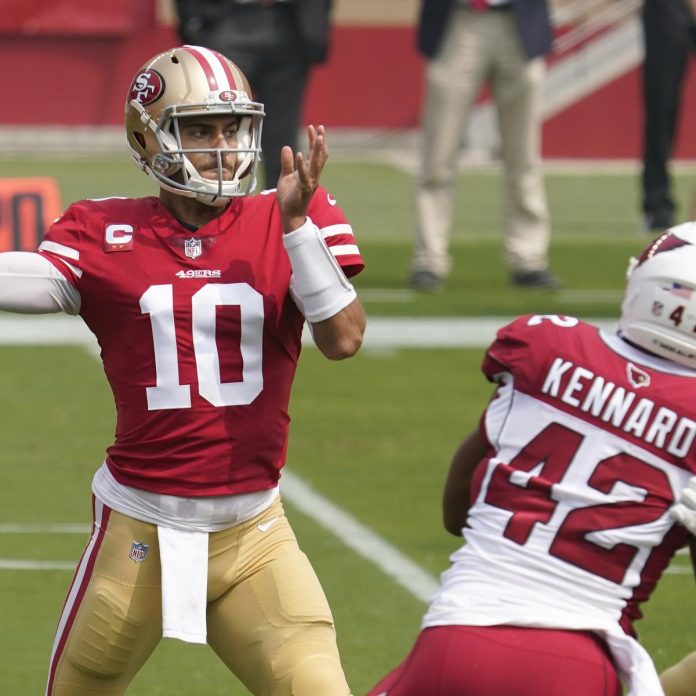 If the San Francisco 49ers are going to shake off their Super Bowl hangover, they’re going to have to perform better than they did in Week 1 against the Arizona Cardinals. The running game struggled to find consistency, the defense surrendered 404 yards and standout tight end George Kittle briefly left the game with a knee injury.

The result was a loss to a division rival, an 0-1 hole and the potential start of a nightmare scenario for the 49ers faithful.

The good news is that there are still 15 games left to be played, and there are several reasons it’s too early to be hitting the panic button.

Losing hurts, and it’s never good to lose to a division rival. It’s even worse when every other team in your division picks up a victory. However, the albeit cliched idea that this is only one loss does hold true. One loss is not going to keep the 49ers out of the postseason or even prevent them from clinching home-field advantage.

Last season, the Baltimore Ravens lost two of their first four games before going undefeated through the rest of the regular season. San Francisco can bounce back from a disappointing Week 1 performance. Had the 49ers lost Kittle for an extended period of time, Week 1 would be far harder to overcome.

For now, it appears that Kittle’s knee injury is not serious.

“He was a little sore today but we’ll wait to see how he is on Wednesday to see if he’s able to practice or be able to go this week,” head coach Kyle Shanahan said, per ESPN’s Nick Wagoner. “We know there will be some question.”

Kittle returned in the second half against Arizona, though he didn’t have a second-half reception.

Professionals don’t make excuses, and the 49ers should have none coming out of Week 1. However, fans can take some solace in the fact that this was far from a typical Week 1.

With no preseason and several new pieces in the starting lineup, San Francisco faced more challenges than just the Cardinals on Sunday. A lack of established chemistry likely contributed to the team’s mistakes and mental lapses—including five penalties for 53 yards and a blocked punt—and as we’ve seen in the past, sloppy football can doom even the most talented of teams.

For example, San Francisco was just 2-of-11 on third down and 0-of-2 on fourth down. It’s hard to expect that sort of inefficiency as the 49ers round into midseason form.

On Sunday, the 49ers were much closer to preseason form.

Trying to find positives in a loss is often pointless, but not in this case. While the game as a whole was underwhelming, it’s worth noting that a couple of new (ish) players performed extremely well.

For one, San Francisco finally saw the debut of running back Jerick McKinnon. Signed as a free agent two offseasons ago, McKinnon hadn’t played a regular-season down for the 49ers before Sunday because of injury. He finished with three catches, 44 yards from scrimmage and a touchdown—and he should be a big piece of the offensive game plan in 2020.

Perhaps even more importantly, it was a great 49ers debut for left tackle Trent Williams. He was acquired to replace retired six-time Pro Bowler Joe Staley, and he did not disappoint.

Williams was responsible for no sacks or penalties in 62 snaps, according to Pro Football Focus, and he was named to PFF’s Team of the Week.

After missing all of 2019 with a holdout, Williams might have been a liability along the offensive line. Instead, it looks like he’ll be a strength at one of the game’s most important positions.

While the Cardinals didn’t appear to be the most daunting opponent the 49ers could have faced in Week 1, they were far from pushovers. With Kyler Murray in his second season and wideout DeAndre Hopkins leading the receiving corps, Arizona was always going to be a tough challenge for the 49ers defense.

Things should get a bit easier form here, as San Francisco has very winnable games in each of the next four weeks.

Things kick off with the New York Jets, who might be one of the worst teams in the league this season. The 49ers will have a prime opportunity to bounce back in New York, and then they should be able to get to 2-1 the following week against the New York Giants. They’ll follow the two New Jersey games by hosting the Philadelphia Eagles and the Miami Dolphins.

San Francisco should be 4-1 or—at worst—3-2 after the next month. That would put the 49ers in prime position to make the playoffs. And by the pivotal Week 6 matchup with the Los Angeles Rams, they should be healthy, focused and in midseason form.

Much of San Francisco’s inefficiency in Week 1 came in the passing game, where quarterback Jimmy Garoppolo finished just 19-of-33 for 259 yards and two touchdowns. While those aren’t terrible numbers, they’re not indicative of a top-tier passing attack.

The good news is that reinforcements will be coming—eventually.

Kittle’s knee injury hurt a receiving corps that was already without No. 1 receiver Deebo Samuel and rookie wideout Brandon Aiyuk. Though Samuel suffered a setback in his recovery from foot surgery, he is expected to be back by Week 4.

“Really hoping to get him back by the Eagles game, but we got to see how this heals and how it goes right now,” Shanahan said, per Jennifer Lee Chan of NBC sports Bay Area.

Shanahan also believes that Aiyuk will be available for Week 2.

By the time the 49ers face their tough midseason stretch—they have games against the Rams, New England Patriots, Seattle Seahawks, Green Bay Packers and New Orleans Saints—they should be at full strength offensively.

Film & 40s: Mickeys and Whiskies: The Other Me

Admin - September 22, 2020 0
You need Premium to view this Subscribe to Giant Bomb Premium to get access to this and more premium shows, live streams, and podcasts. Get Premium Learn More Jan, Abby, and Ben are back for another round of nostalgia. This time we get down into the science and morals of cloning, dancing in the cafeteria,…

9 Best Low-Carb Cocktails You Can Drink on the Keto...

Everything We Know So Far About Season 2 of Euphoria

The Season 5 Cast of Below Deck Med is Doing Great...

Film & 40s: Mickeys and Whiskies: The Other Me

9 Best Low-Carb Cocktails You Can Drink on the Keto...

Everything We Know So Far About Season 2 of Euphoria