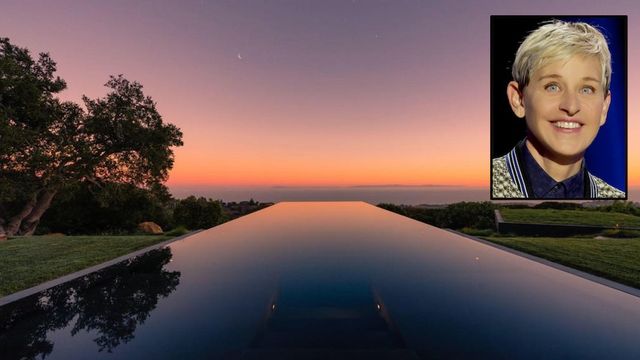 The talk-show host Ellen DeGeneres and her wife, the actress Portia de Rossi, have unveiled their most recent renovation project.

Located in the exclusive enclave of Montecito, CA, the sprawling spread is being offered for $39.9 million, Variety reported.

The couple purchased the hilltop residence early in 2019 for $27 million, and then quickly got to work, expanding and modernizing the show-stopping space.

The compound now includes a 8,188-square-foot, three-bedroom main house, a one-bedroom guesthouse, a cabana with a gym, and a security office.

Dubbed Salt Hill and set behind gates, the stylish abode looks out onto the Pacific Ocean.

Built in 2011, the main house opens onto a veranda with a fire pit, dining area, and seating, and looks out to a dramatic, negative-edge pool that juts over the hillside.

Entering directly into the great room with bamboo ceilings and walls of glass, the massive space includes living and dining areas that lead outside. The kitchen features blackstone counters and open shelves, and faces glass walls that also access an outdoor dining area.

One of the bedrooms is being used as an office, and there’s a library with built-in bookshelves and clerestory windows. The luxe master suite includes a spalike bath with a built-in stone tub that looks out to the mountain and ocean views, and also contains two sinks and a separate shower.

The showbiz couple have bought and sold multiple properties over the years. They own a posh Beverly Hills mansion they bought from Adam Levine, another home-flipping celeb, which they picked up last year for $42.5 million.

DeGeneres, a comedian and veteran daytime talk-show host, has recently been contending with reports of a negative work environment at her show, leading to the ousting of several top executives.

5 strategies that every startup should implement to sustain its business

New Study: Gen X Is the New Baby Boomer When It Comes to Ageism in Hiring

Republican legislators are refusing to pay two Wisconsin counties the $3...