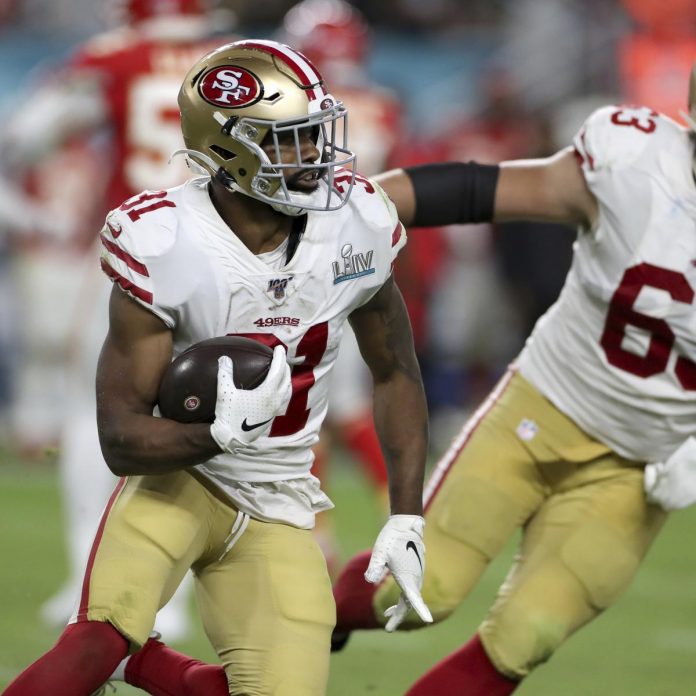 Leonard Fournette is a Tampa Bay Buccaneer and Adrian Peterson is a free agent. In just one week, rosters have shifted and drafts have gotten even more complicated.

Having up-to-date rankings is a helpful foundation for expectations, but draft prowess comes in forward-thinking adaptability. Taking a five-round mock draft in a standard league as a basis, you can set general expectations of value and recognize where your tiers deviate from what you’re seeing on draft day.

Every manager judges players differently, and therefore, no mock can pinpoint how selections should play out. In this instance, these picks follow subjective rankings but are relatively in line with the consensus.

We’ll go through each round of the draft, addressing a couple interesting valuations that can help in draft deliberations. Then, as some more light-hearted preparation, we’ll list some of this year’s more intriguing team names.

The top three picks are obvious, talented bell-cow backs who do all of their backfield’s work, receiving and rushing. The next three form the second tier, all with upside similar to the tier above but more question marks. Then there’s a tier split, and a particularly risk-averse manager could not be faulted for picking Michael Thomas’ advantage over other receivers instead of another high-volume back.

The four backs at the back of the first all have risk factors, whether that be potential lack of receiving work, offensive uncertainty or role uncertainty. But all have tremendous upside. The league’s best fantasy receiver won’t match a top back’s production, but this gets to be the range where your positional tiers may deviate from the norm enough to grab one of the undisputed top two receiving options in expectation of a back you prefer dropping.

A week ago, Miles Sanders wouldn’t be this high. Four weeks ago, he could have been even higher. Sanders got hurt, among other Philadelphia Eagles, prompting a downgrade for the entire offense, including its dynamic young back. But the lack of concern about Sanders’ injury from Philadelphia’s staff has been proved by disinterest in a Fournette acquisition and the release of three running backs during September 3 cuts.

Sanders should be healthy sooner than later, and that warrants a high draft grade, despite concerns about the surrounding offense.

The big questions here are likely George Kittle and Travis Kelce. If you like the backs and receivers likely to be available in the third, grab one for a massive advantage at tight end. More often than not, it’s a better idea to continue shoring up the more valuable positions.

Like wide receiver in Round 1 or tight end in Round 2, you can only grab the high-scoring upside of Lamar Jackson and Patrick Mahomes if you’re comfortable with the players you have, and expect to get, at running back and receiver. People can win championships streaming quarterbacks, they can’t with the other two.

The big deviation from consensus here is Raheem Mostert. Many cite his competition for touches, and that is a reasonable concern, but his talent and fit for Kyle Shanahan’s scheme were undeniable in the later weeks of 2019. He’s been the starting back all offseason and is clearly the team’s best at the position. Mostert is built for running and, more importantly, the 49ers added Trent Williams to the offensive line and continue to be built for running.

Melvin Gordon in the fourth may feel uncomfortable for many, as he’s been ranked across the third round. But the Denver Broncos really like what Phillip Lindsay brings to the table, and the murmurs of a split backfield should be taken seriously given his talent.

Similarly, Jonathan Taylor and Amari Cooper feel shakier than consensus has decided. Marlon Mack is a talented back with coaching praise this offseason, suggesting Taylor’s road to touches may be more limited than people hope. Cooper, meanwhile, should conversely have young players eating into his work as Michael Gallup continues to improve, and CeeDee Lamb’s first-round selection was no mistake. Plus, Cooper’s camp has reportedly been uninspiring.

It’s all a mess rounds two through four, and it only gets messier in Round 5. This is really where your team’s foundation dictates how you build moving forward. If you have three excellent backs, maybe you don’t need to bet on one of the two wildcard running backs. If you don’t, then maybe you do.

After Peterson’s release, the Antonio Gibson hype train is at full speed, and the drivers can’t be faulted for it. He may have only had 33 carries in college, but he’s an unbelievably explosive back with the obvious receiving upside.

On August 30, Ron Rivera (who helped open the door for Christian McCaffrey to be who he is today) spoke on their intentions with Gibson to The Athletic‘s Ben Standig: “We have a plan for him. I know we haven’t shown you guys the whole plan, and that’s part of the secret that we’re trying to keep going into the regular season.”

[Cont] “..young guys some reps, but I didn’t know I was going to get cut, there was no indication. Today (Ron) Rivera just said this is always tough, but yes we’re gonna release you & go with this offensive style. I respect coach. Look (Antonio) Gibson is a hell of a talent…2/4

[Cont] “…This system really fits him. I feel like I can do that pony style too, more as a receiving back. We were all working on it, but they really want one main guy to do it & they drafted Gibson for it. Trust me, I still have a lot in me, more to strive for & do again…3/4

On September 4, Peterson was released and mentioned Gibson to Josina Anderson while hypothesizing the rationale for his cut: “Look, Gibson is a hell of a talent. This system really fits him … We were all working on it, but they really want one main guy to do it and they drafted Gibson for it.” As far as upside goes past the first and second rounds, Gibson could be the draft’s most intriguing option.

Too Prescott to Handle

The Fresh Prince of Helaire

Once Saquon a Time in Hollywood

Chillin’ at the Golladay Inn

Keenan: Masters of the Universe

LG patents what might be the world’s first expandable, edgeless TV...