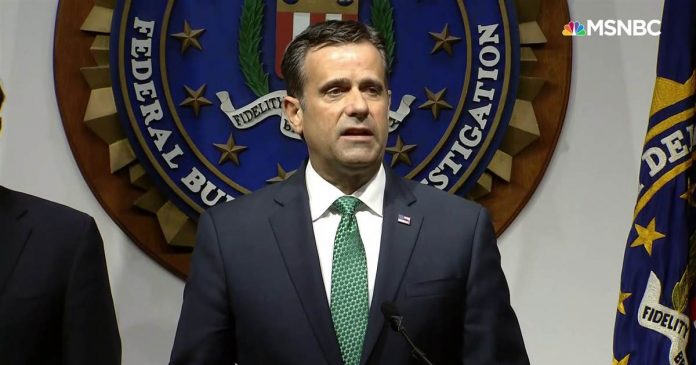 Iranian intelligence was responsible for a recent campaign of emails sent to intimidate Florida voters, the FBI announced Wednesday night, adding that Russia was also working to influence the election.

The emails, which ominously instructed Democratic voters in Florida to switch to the Republican Party, purported to come from the Proud Boys, the right-wing group of Trump supporters that became a flashpoint during the first presidential debate.

But the emails were actually “spoofed” and had been designed “to incite social unrest and damage President Trump,” said John Ratcliffe, the director of national intelligence. Ratcliffe did not explain how the emails were damaging to Trump, because they were urging Democrats to switch to the Republican Party.

Many states, including Florida, make voters’ information, including their names and party affiliations, easily accessible to members of the public who request it.

Both Iran and Russia had obtained some Americans’ voter registration information, Ratcliffe said.

In the same news conference, FBI Director Christopher Wray said there was still no way for Iranian or Russian intelligence to change Americans’ votes.

“You should be confident that your vote counts,” Wray said.

Download the NBC News app for breaking news and politics

But this operation, a more active trick to falsely accuse some of Trump’s most infamous supporters, represents a new front for Iranian operations, said John Hultquist, who heads intelligence analysis at the cybersecurity company Mandiant.

“This incident marks a fundamental shift in our understanding of Iran’s willingness to interfere in the democratic process,” Hultquist said in an email. “While many of their operations have been focused on promoting propaganda in pursuit of Iran’s interests, this incident is clearly aimed at undermining voter confidence.”

U.S. election officials have repeatedly said the measures the government has taken ahead of the 2020 election in response to Russia’s interference in the 2016 election will make this the most secure in modern history.

Kevin Collier is a cybersecurity reporter based in New York City.

Conor McGregor Makes a Joke About His Broken Leg in His...

Netflix’s Love Is Blind Is Getting a Season 2. Here’s Everything...