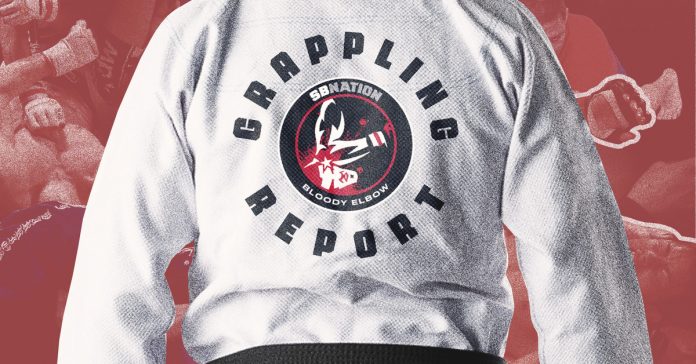 This past week has seen a whole host of top brown belts making the jump to the highest levels of competition, starting off with a huge group promotion event at Dream Art where four of the top brown belt competitors got their final belt promotion. Lucas Gualberto made the jump, along with all three of the Munis brothers; Anderson, Alex, and Erich. Erich was actually the top-ranked pound-for-pound brown belt prior to the promotion. Shortly after that, 10th Planet’s Keith Krikorian received his black belt from Eddie Bravo.

It was then that the Mendes brothers, Rafael and Guilherme, promoted the first black belt to come from the Art Of Jiu Jitsu kid’s program, nineteen year-old Jessa Khan. This came after Khan had already won silver in a mixed brown and black belt division at the Abu Dhabi Grand Slam Tour Miami the week before. She was then joined by Tainan Dalpra as the second elite grappler to come from the AOJ kid’s program, as he was promoted on the podium of the IBJJF Pan-Ams 2020.

It’s been an important week for the biggest tournament organization in the sport as they put on their first major event since the pandemic started, the Pan-Ams 2020. With an event of this scale scheduled over several days going off without a hitch, the IBJJF decided to pick up the pace and announce the opening of registration for the no gi edition of the Pan-Ams and the Atlanta Open. Both of these events will take place on the same weekend and are scheduled by the end of the year.

At the same time, rumors started to surface that they will be changing one of the most hotly-contested rules in place, the ban on knee-reaping and Heelhooks. The ban on these techniques is something that some members of the BJJ media community have questioned, along with a large proportion of top-level competitors. Then, as the Pan-Ams 2020 moved into it’s final day, the IBJJF confirmed that the rumors were true and heelhooks and knee-reaping will be legal at brown and black belt in 2021.

Fowler was on top of the world recently after repeating his victory over Craig Jones at SUG 17 and this week saw him defend his newly-earned title against Vinny Magalhaes. It was a close match that necessitated the full extent of EBI overtime rules and Fowler managed to edge out a close victory against a phenomenal competitor. Not content with this performance, Fowler decided to enter the Pan-Ams the following weekend.

Here, Fowler was competing at his belt level instead, brown belt, and won the Super-Heavyweight division in his first time competing in the gi for a year and a half. He had to beat Legion Jiu-Jitsu’s Breylor Grout in the final, one of the hottest prospects from Keenan Cornelius’ academy. He also went on to take silver in the Absolute division after losing the final against the incredible Lightweight, Andy Murasaki.

This is something that the world is getting used to and high-level competitive athletes are no different. Gilbert Burns was one of the first elite black belts who’s fight-career suffered as the result of a positive Coronavirus diagnosis when his title-fight was postponed back in July. He started to get back on the trail to glory but was sadly derailed this week when Kamaru Usman requested more time to prepare for the title-defense, delaying the fight until some time in 2021 now.

Shortly after this news broke, Brian Ortega was nearly as unfortunate leading up to his title-eliminator fight with ‘The Korean Zombie’ Chan Sung Jung. While the Gracie Jiu-Jitsu black belt is fine, his coach Rener Gracie will not be in his corner after a second positive Coronavirus test just before boarding the plane. Bad luck comes in threes of course and Rafael Dos Anjos was also forced out of his fight at UFC 254 after catching the virus and reportedly suffering quite badly.

Using the Achilles Lock Grip to control and The Aoki Lock

Chaining Together Lower and Upper Body Submissions with K-Guard

Mariners, Astros make four-player trade before playing each other

Pros and cons of Packers trading for WR Randall Cobb