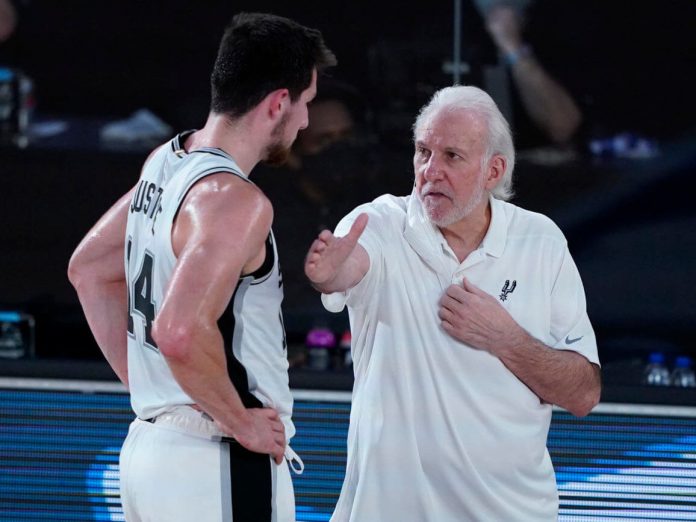 Gregg Popovich is one of the best NBA coaches of all-time. You could say that he’s one of the very best coaches in sports history, period. After becoming a five-time nba champion as the Spurs’ head man, it’s time someone took his place.

The rumors of Coach Popovich to Brooklyn Nets are over as Steve Nash accepted the gig earlier today.

So, what should he do? He should leave behind his rank as head coach and focus on his ability to better the franchise as their president. Who’d be the perfect fit to take his place as lead-controller from the bench?

She already has an unprecedented rapport with Spurs’ players. This video shows her feeding Rudy Gay with the orange during warm-ups.

Becky Hammon helping Rudy Gay get some shots up. Gay is expected to start tonight pic.twitter.com/TCaqwXdoY5

Coach Popovich has spoken on Becky’s behalf many times. Here are comments from Popovich several years ago in regards to his thoughts about Hammon.

She’s right in the middle and she knows how to do it and our players really respond to her. She’s just a natural…She talks the game. She understands the game. So for all those reasons, you really know she’s got that same sort of Avery Johnson, Steve Kerr, [Mike] Budenholzer-type thing.

Pau Gasol, an 18-year nba veteran with nearly 21,000 points, chimed-in about Becky as well. Pau wrote about Hammon in The Players’ Tribune back in 2018, saying:

Arguing on Coach Hammon’s behalf would feel patronizing. To me, it would be strange if nba teams were not interested in her as a head coach…

Your coaching retirement awaits you, Gregg Popovich. Becky has proved herself. As a Colorado State Ram (1995-99) collegiately, Hammon surpassed Keith Van Horn in 1998-99 to become the all-time leading scorer in WAC history.

As a WNBA player, Hammon was a six-time All-Star, was named as one of the WNBA’s Top 15 Players of All Time in 2011, and had her No. 25-jersey retired by the San Antonio Stars.

As an assistant coach in the nba, Becky just completed her sixth season with the Spurs. We know what Gregg Popovich and Pau Gasol think of her based on the statements above.

Now is the time to step aside and promote Becky Hammon as the next head coach of the San Antonio Spurs. She deserves it.

Jane Fonda Wishes She Cheated on Her Husband – And I...