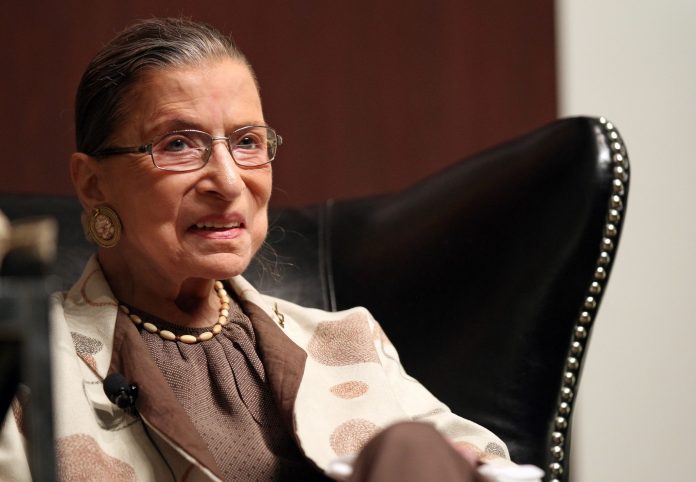 From sorrow and grief to concerns about the presumed political fight ahead to name her replacement, Supreme Court Justice Ruth Bader Ginsburg’s death on Friday sparked a range of reactions from Illinois elected officials.

Ginsburg died at her home in Washington at age 87 from complications from metastatic pancreatic cancer, the court said.

“She represented the finest among lawyers in our country. A giant in her advocacy for women’s rights, civil rights and respect for the rule of law,” Lightfoot tweeted. “We must honor her legacy and all her contributions to American jurisprudence. Rest in power, RBG.”

Illinois Sen. Tammy Duckworth said the nation lost a hero with Ginsburg’s death and called her “a 5′1″ giant who gave a voice to girls and women everywhere and moved the needle forward in our long fight toward justice and equality for all.”

Cook County Board President Toni Preckwinkle, who also chairs the Cook County Democratic Party, said: “There are no words to describe Ruth Bader Ginsburg’s enormous impact on the history of our nation. She has fought for gender equality for decades and in the last several years has battled cancer with the same tenacity. Our country has lost a beacon of light and hope in her passing. Rest in power Justice Ginsburg.”

Ginsburg’s death just over six weeks before Election Day is likely to spark a debate over whether the Republican-led U.S. Senate should confirm her replacement on the court if President Donald Trump nominates someone.

In 2016, Senate Majority Leader Mitch McConnell refused to act on President Barack Obama’s nomination of Judge Merrick Garland to replace Justice Antonin Scalia after his death and the seat remained open until after Trump took office. McConnell on Friday night said a Trump nominee to the court would get a vote in the Senate.

Mendoza tweeted separately regarding McConnell that she “would NEVER trust Mitch McConnell to do the right thing. He’s already stated he’d move to fill the vacancy, even before she died.”

U.S. Rep. Lauren Underwood, a Naperville Democrat, said in a statement that she was “shaken and devastated” by Ginsburg’s death.

“Her fierce advocacy for the protection of rights for all people under the law — women, workers, LGBTQ people alike — and her guardianship of the Constitution must not be taken for granted. As a lawyer, she challenged and defined ‘equal justice under the law’ in a way that changed our country to make it fairer and better,” Underwood said. “As a Supreme Court justice, she upheld those sacred principles. Her life and work paved a way for women like me to challenge norms and fight for people and causes that make our country stronger.

“Our democracy depends on the American people having a voice by electing a President who will fill this vacancy.”

U.S. Rep. Adam Kinzinger, a Channahon Republican, said in a statement the country lost “a remarkable woman and renowned public servant” but did not mention what should happen with her replacement on the court.

“Justice Ginsburg undoubtedly left her mark on this world and her commitment to the rule of law will inspire generations to come. The second female ever appointed to the Highest Court in the Land, she was a trailblazer who proudly served our country for over 27 years and stood as a role model to many. Justice Ginsburg believed deeply in the freedoms of America and our nation is better for her service,” Kinzinger said in the statement. “May we honor her dedication and love of country.”

U.S. Rep. Jesus “Chuy” Garcia, a Chicago Democrat, said he and his wife were “heartbroken” by the news, and called on lawmakers to wait until the start of the next presidential term to make her replacement.

“Justice Ginsburg’s last wish was to be replaced after the next President is installed; we must honor her wish and ensure that the People’s will is reflected in the upcoming nomination process,” Garcia said in a statement. “Our next Supreme Court Justice must strive to uphold Ginsburg’s enduring commitment to equality, opportunity and justice for all.”

Illinois Sen. Dick Durbin said in a statement that Ginsburg was “an American hero” and called on the Senate to leave her seat unfilled during an election year.

“Please remember Senate Majority Leader Mitch McConnell’s demand that Supreme Court vacancies go unfilled during a presidential election year, which was also Justice Ginsburg’s dying wish,” Durbin said in a statement. “Senator McConnell pleaded with us to let the voters have the last word. Every member of the Senate should be asked to commit to the McConnell Rule.”

Illinois Gov. J.B. Pritzker said America had “lost an icon and inspiration” and referenced a National Public Radio report that days before her death, “Ginsburg dictated this statement to her granddaughter Clara Spera: ‘My most fervent wish is that I will not be replaced until a new president is installed.’”

“America has lost an icon and inspiration. Justice Ruth Bader Ginsburg was first a trailblazer and then a bulwark for equality, whether you are a woman, gay, a person of color or disabled. Just as importantly, she was a shining role model for girls everywhere — a testament to working hard and fighting for what’s right. Her legacy will endure, but only if we fight as hard as she did to protect it,” Pritzker said.

“MK and I grieve for Justice Ginsburg’s family, friends and followers — but most of all, our entire nation. Our prayer is that we honor this giant by honoring her fervent dying wish.”

“In forging her own path, she built a road for those who followed. At the heart of Justice Ginsburg’s life’s work was creating opportunity within a legal system that failed to recognize equality for many. Not just a leader in the fight for gender equality, she embodied passion and determination in her quest for justice for all,” Bustos said in a statement. “Famously, when asked when there would be enough women serving on the Supreme Court, Justice Ginsburg responded, ‘when there are nine.’ Many women speak of making sure others have a seat at the table, but Justice Ginsburg built the chairs in which we rest.”

The Illinois Supreme Court also released a statement Friday night, saying: “This is an incredibly sad day for our country. We have lost an outstanding jurist and icon of jurisprudence. On behalf of the entire Illinois legal community, we send our sympathies and prayers to her family and friends. Her dedication and service to this country was a shining example for all — especially women. RBG will live in the hearts and minds of the American people for decades to come.”

U.S. Rep. Dan Lipinski, a Chicago Democrat, said in a statement that Ginsburg “was a trailblazer and a giant of the Supreme Court who had a tremendous impact on our country. Before we begin the political talk about her replacement, we should remember her life and her legacy.”

Poland’s Constitutional Court Has Effectively Banned Abortion, But We Will Not Stop Fighting For Our Fundamental Rights

Admin - October 31, 2020 0
Choose your subscription Trial Try full digital access and see why over 1 million readers subscribe to the FT For 4 weeks receive unlimited Premium digital access to the FT's trusted, award-winning business news Read more Digital Be informed with the essentialnews and opinion MyFT – track the topics most important to you FT Weekend…

‘Class Action Park’ made me nostalgic for a childhood my Gen...