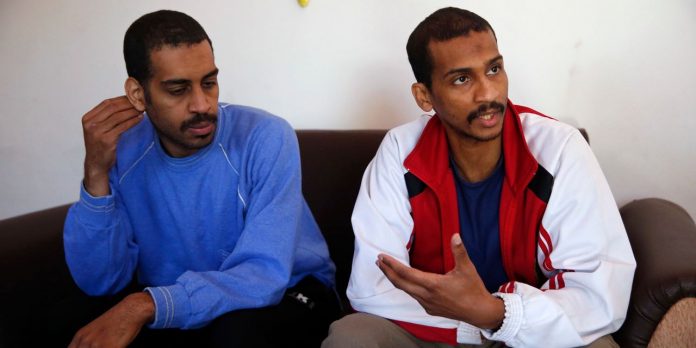 Two British Islamic State militants accused in the torture and killing of Western hostages were brought to the U.S. to face criminal charges in Virginia, U.S. authorities said Wednesday, after more than two years of legal limbo that followed their capture in Syria.

The men, El Shafee Elsheikh and Alexanda Kotey, who had allegedly supervised Islamic State detention facilities that held hostages, were scheduled to make their initial appearances in court in Alexandria, Va., on Wednesday afternoon. The Justice Department told the British government in August it wouldn’t pursue the death penalty against them, paving the way for U.K. authorities to provide additional evidence for their prosecution in the U.S.

The two men are accused of being part of a brutal cell that murdered U.S. citizens including journalist James Foley and humanitarian aid workerKayla Mueller in Syria in 2014 and early 2015. The hostages had referred to the guards as the “Beatles” based on their British backgrounds.

The men, who were captured by Kurdish fighters in Syria in 2018 and have been in U.S. military custody in Iraq since last year, “engaged in a prolonged pattern of physical and psychological violence against the hostages,” the indictment said. They face eight criminal counts including hostage-taking resulting in death, conspiring to murder Americans outside the U.S., and conspiring to provide material support to terrorists, according to the indictment dated Tuesday and unsealed Wednesday.

The men are also accused of engaging in a conspiracy that led to the beheading of journalist Steven Sotloff and aid worker Peter Kassig.

“If you have American blood in your veins or American blood on your hands, you will face American justice,” Assistant Attorney General John Demers, who runs the Justice Department’s national security division, said in remarks that recounted the lives of the killed Americans.

Mr. Sotloff had traveled to the region to “give a voice to the people who didn’t have one,” Mr. Demers said, citing a friend of Mr. Sotloff’s. Ms. Mueller had so inspired the members of the military who conducted the operation that led to the death of Islamic State’s leader last year that they had named their mission “Task Force 8-14,” in reference to her birthday on August 14, Mr. Demers said.

The families of the four Americans said they welcomed the decision to forgo the death penalty and prosecute the men. “Now our families can pursue accountability for these crimes against our children in a U.S. court,” they said.

The announcement came hours before Vice President Mike Pence was set to debate Democratic vice presidential nominee Sen. Kamala Harris. Ms. Mueller’s parents spoke at the Republican convention in August, criticizing the unsuccessful attempts of former President Barack Obama and Democratic nominee Joe Biden to free her. “If Donald Trump had been president when Kayla was captured, she would be here today,” her father said at the time.

A British court had earlier blocked authorities from sharing key evidence in the case against Islamic State fighters because the Trump administration hadn’t provided assurances about not pursuing the death penalty. Britain abolished capital punishment for all crimes in 1998 and typically seeks assurances the death penalty won’t be used when assisting foreign governments with prosecutions.

In an August letter to his U.K. counterpart, Attorney General William Barr said the men would be transferred to Iraq for prosecution in the Iraqi justice system unless British authorities provided assistance by Oct. 15.

Between 2012 and 2015, the indictment alleges, Messrs. Kotey and Elsheikh were part of a conspiracy that committed murders and forced others to witness them, forced hostages to fight each other, engaged in beatings with punches and sticks that lasted up to 20 minutes, waterboarded some hostages and denied bathroom access, in addition to other punishments.

The imprisonment of the two men in the U.S. would be different, and would include sanitary conditions and three meals a day, said the U.S. attorney in the Eastern District of Virginia, Zach Terwilliger, whose office is prosecuting the case. ”All things denied to James, Kayla, Steven and Peter,” Mr. Terwilliger said.

Mr. Elsheikh left London in 2012, entered Syria across the Turkish border, and purchased an AK-47 assault rifle once he arrived, the indictment said. In 2014, he sent a voice message to a family member explaining: “there’s many heads, this is just a couple that I took a photo of.”

Another member of the group, Mohamed Emwazi, known as “Jihadi John,” was killed in a 2015 drone strike.

The hostages, captured in 2012 and 2013, were held in a prison in Sheikh Najjar, Syria, which the hostages referred to as the “dungeon,” the indictment said. The families of those taken hostage received emails in the following months and years seeking at various times 100 million euros ($118 million), the release all Muslim prisoners in the U.S.,and other demands.

How to Come Up with Topic Ideas for Podcast Episodes

All of the Marvel Easter Eggs From Episode 2 of Loki

Joseph Baena Shows Off His Bodybuilding Poses in New Photos