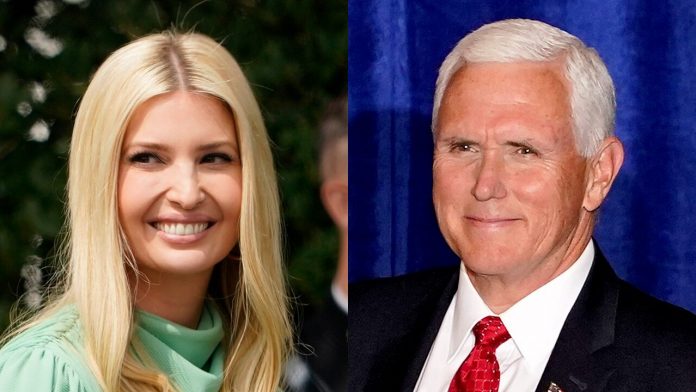 Adviser to the president Ivanka Trump and Vice President Mike Pence will visit Minneapolis on Thursday to promote President Trump’s law-and-order message, according to the Associated Press.

Minneapolis has been rocked by the coronavirus pandemic and a summer of protests – some of which escalated into violent riots – following the death of George Floyd May 25 while in the custody of city police. Since then, some residents have been calling to defund the police while others support law enforcement.

The vice president and first daughter are expected to host a listening session with a “Cops for Trump” group and city residents who say the president’s reelection campaign has been “negatively impacted by crime and violent extremism,” AP reported.

The two will also be discussing jobs in the state, which Trump lost to former 2016 Democratic presidential candidate Hillary Clinton.

Trump offered to deploy military police in Minneapolis amid unrest in May after a White police officer was captured on video kneeling on Floyd’s neck for nearly nine minutes; Floyd, a Black man, died shortly after.

The president also told a reporter during his August visit to the city that the Federal Emergency Management Agency’s decision to deny the city relief for extensive fire damage after riots was “punishment” for allowing unrest, according to the Minneapolis-St. Paul Business Journal.

Minneapolis Mayor Jacob Frey ordered the city’s Third Precinct to evacuate on May 27, saying, “The symbolism of the building cannot outweigh the importance of life, our officers or the public. We could not risk serious injury to anyone. And we will continue to patrol the Third Precinct.”

A protester gestures in front of the burning 3rd Precinct building of the Minneapolis Police Department in Minneapolis. (AP Photo/Julio Cortez File)

A number of businesses in the area were destroyed as a result of May riots and scattered demonstrations that continued through August. Now, the city is facing immense damage costs and a spike in crime amid calls to defund police.

Minneapolis is expected to spend $4.8 million to temporarily rent a building for city police after their precinct headquarters was destroyed.

The visit by the first daughter and vice president also comes after a Jefferson County, Ky., grand jury on Wednesday indicted one of three officers who were involved in the shooting of Breonna Taylor on a $15,000 bond, sparking more protests across the country.

These 27 Rice Bowl Recipes Are Our Weeknight Saviors

4 Holiday Cocktails to Match Whatever Celebratory Mood You’re In