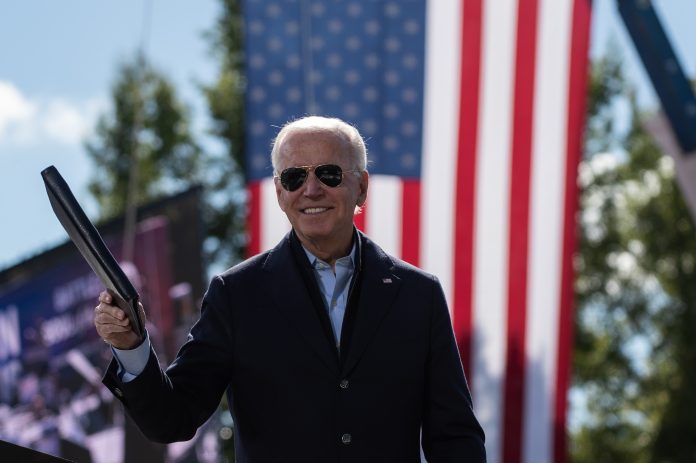 Joe Biden finally has a court-packing answer—sort of. After dodging the question of what he would do about the Supreme Court, he told CBS’s Norah O’Donnell he would create a “bipartisan commission” to study and recommend possible reforms and report back to him in six months, should he be elected. “There are a number of things that our constitutional scholars have debated, and I’ve looked to see what recommendations that commission might make,” Biden said. “There are a number of alternatives that go well beyond court-packing.”

It is, in substance, not that different from Biden’s previous nonanswers on the very same question. Pressed on whether he would push to expand the court, Biden has consistently responded with variations of “it depends.” First, Biden said it was dependent on what Senate Republicans did about the nomination of Amy Coney Barrett, which progressed from committee amid Democratic protests on Thursday. Now Biden is saying it depends on what his bipartisan commission recommends—even though its suggestions may not come until next summer, by which time conservatives on the court may well have begun a Reign of Terror.

The timing of Biden’s new answer is certainly not coincidental. In the first debate, Trump hounded Biden on the issue of court-packing, and for the president’s backers, it was the silver lining of an otherwise atrocious performance. Biden’s blue ribbon commission was a way to take an arrow—possibly the only arrow—out of Trump’s quiver before the debate on Thursday night. It is, first and foremost, a short-term political strategy.

However, the choice of the “blue ribbon” bipartisan commission (it’s unclear why such commissions are always given prizes as if they were farm animals), a depressing hallmark of the Obama era, is also telling. The constant pining for bipartisanship was perhaps the most damaging strategic error of Obama’s first term, exemplified by the long, lonely search for a Republican vote on the Affordable Care Act and an austerity-embracing bipartisan commission on “fiscal responsibility.”

In a polarized, partisan age, the bipartisan commission is, theoretically, a way of overcoming a gridlocked Congress. Elected Republicans may not be willing to break ranks, but, in theory, GOP-aligned “experts” might—providing the pressure needed to actually get something done. In practice, however, they either achieved not much at all or led to nightmarish results. Simpson-Bowles, the commission on fiscal responsibility, was a disaster. Looking at the post-2008 economic wreckage, the commission proceeded from the incorrect presumption that the economic downturn was the result of the federal deficit and not the multitrillion-dollar collapse of the American housing market. It recommended deep cuts to entitlements and spending. “Under the guise of facing our fiscal problems, Mr. Bowles and Mr. Simpson are trying to smuggle in the same old, same old tax cuts for the rich and erosion of the social safety net,” wrote The New York Times’ Paul Krugman in 2010.

The good news for Biden’s bipartisan court reform commission is that the recommendations of such bipartisan commissions are rarely acted upon. Simpson-Bowles was something of an exception—it provided the basis for discretionary spending cuts passed into law in 2011, and both Simpson and Bowles were advocates of the dreaded sequestration, which resulted in automatic cuts. But the commission’s conclusion was never sent to Congress, with only 11 of the commission’s 18 members voting to advance it.

Instead, both parties used its recommendations to attack each other, while deficit hawks held it up as justification for more belt-tightening. These commissions are vessels for pure Beltway conventional wisdom, which is very often wrong, as it was in Simpson-Bowles.

The silver lining of Biden’s bipartisan commission is that, at present, there isn’t really a Beltway consensus on court reform—other than the fact that court-packing is bad. This could lead to more ambitious and expansive recommendations than are typical, though no one should hold their breath. The other bit of good news is that, should this commission follow tradition and produce a set of deeply unpopular recommendations, they will likely simply be ignored.

Still, the most likely result is that the recommendations will fall short of packing the court and will thus be used as a cudgel by both Republicans and the mainstream media to push back on any ambitious court reform.

Biden’s nonanswer on court-packing was seen as a positive development by many on the left, but it’s hardly in character for the former vice president, an arch institutionalist who is still somehow convinced that he will convert a half-dozen Republican senators upon entering the White House. The bipartisan commission on court reform follows in the proudest tradition of side-stepping the actual question of court-packing while promoting a series of milquetoast reforms that will both fail to address the enormity of the problem at hand and still lack the credibility to gain Republican support in Congress.

Part of the problem is that the creation of the commission—and not just the timing of its announcement—is rooted in politics. Biden’s presidential campaign is built on the idea that he can return the country to normalcy, that his election will break a fever that has been raging since long before Donald Trump took office. Although Biden has recently flirted with some actual big ideas—citing the New Deal as an inspiration and keeping court-packing on the table—a toothless bipartisan commission that performs reasonableness but accomplishes little is the kind of idea that is central to Biden’s approach to politics. It’s a return to normal in many ways, though that might not be a good thing.