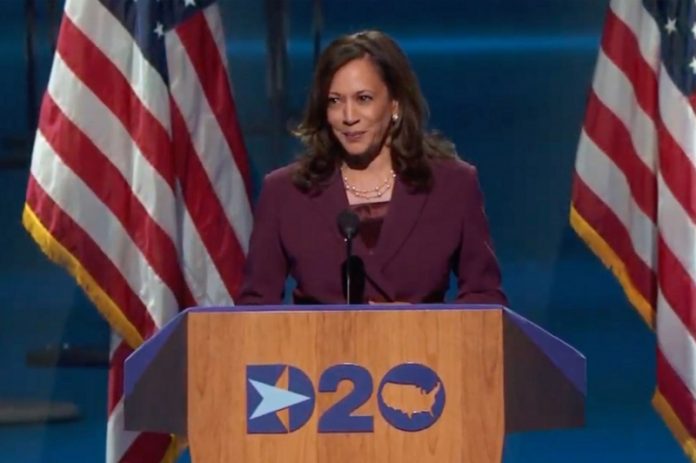 Appearing on CNN’s State of the Union Sunday, Harris, D-Calif., did not say whether she would take a coronavirus vaccine if it were approved and distributed before the election, criticizing Trump’s response to the pandemic and questioning his reliability as a source of credible information related to the virus.

“I will say that I would not trust Donald Trump and it would have to be a credible source of information that talks about the efficacy and the reliability of whatever he’s talking about. I will not take his word for it. He wants us to inject bleach. No, I will not take his word,” Harris said, referring to comments Trump made in an April press briefing that prompted Lysol to warn against ingesting its disinfectant.

Last week, Food and Drug Administration Commissioner Stephen Hahn said the agency would be willing to consider an emergency authorization of a vaccine for covid-19 before the completion of phase three clinical trials, after it issued a similar authorization for convalescent plasma to treat the novel coronavirus.

On Sunday, Harris said that Trump has been an “abject failure” in responding to the pandemic as the United States leads the world with 6,260,543 recorded covid-19 cases and 188,704 deaths related to the virus, according to data collected by John’s Hopkins University.

Harris also clarified running mate Joe Biden‘s plans to issue a federal mandate requiring the use of masks or other face coverings in public during the pandemic.

“It would be a standard,” she said. “This is not about in terms of the priorities of Joe Biden and myself, this is not about punishment. It’s not about big brother. It is simply about saying what a leader says in times of crisis.”

Harris’ home state of California reported 4,905 new cases on Sunday for the highest total in the nation at 732,144, adding 66 new deaths for the third highest death toll in the country at 13,709.

Florida reported 2,564 new cases for the nation’s second highest total at 646,431 and another 38 deaths to push its death toll to 11,849 of residents and 12,001 including nonresidents. Palm Beach County announced it will move to the second phase of its reopening plan on Tuesday, allowing movie theaters, bowling alleys and other entertainment centers to reopen.

San Francisco city officials announced they would close the parking lot at Ocean Beach following a large gathering for a Burning Man event on Saturday, and attractions in Georgia, South Carolina and Pennsylvania also anticipated large crowds for Labor Day weekend despite warnings from health officials.

“We don’t want to see a repeat of the surges that we have seen following other holiday weekends,” said Anthony Fauci, director of the National Institute of Allergy and Infectious Diseases. “We don’t want to see a surge under any circumstances but particularly as we go on the other side of Labor Day and enter into the fall.”

Conor McGregor Makes a Joke About His Broken Leg in His...

Netflix’s Love Is Blind Is Getting a Season 2. Here’s Everything...