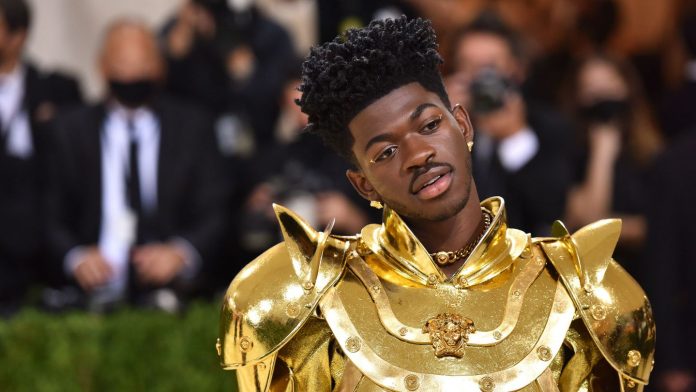 Lil Nas X brought the Montero State Prison from his “Industry Baby” music video to the 2021 Video Music Awards stage last Sunday night. “It’s been, like, a long year for me, and I’ve had to overcome a lot of internal battles,” the 22-year-old rapper told MTV News’s Dometi Pongo after accepting the Video of the Year award for “Montero (Call Me by Your Name).” “The prison represented me breaking out of that.” With his debut studio album Montero, out today (September 19), Lil Nas X (born Montero Lamar Hill) is opening the door and walking listeners through the painful process it took to break free and embrace his truest self — primed to bust up the “homophobic cloud over hip-hop,” according to Kid Cudi.

When “Old Town Road” monopolized the music industry, becoming the longest-running single to own the No. 1 spot on the Billboard Hot 100 in the chart’s history and earning him his first two Grammys, Lil Nas X heard the chatter: Enjoy the limelight now, because you’ve got a one-way ticket to One-Hit Wonderville. The Atlanta-born artist remained clever and confident. That side of him is living his best life on the album’s singles “Montero (Call Me By Your Name)” and “Industry Baby,” or “Dead Right Now” and “Dolla Sign Slime” featuring Megan Thee Stallion. But the bulk of the project reveals him privately wrestling with the possibility that his haters are right.

At the core of Montero’s extravagant and often hilarious rollout — the cheesy lawyer billboards, the pregnancy shoots, The Montero Show — is a window into a resilient soul that refused to stay broken in a world designed to keep him down. Lil Nas X knows now that he deserves to be heard, and Montero’s 15 songs will meet you exactly where you are in discovering that, too. Below is a breakdown of the optimal mood for each track.

Recent Climate Crisis Research Data Predicts A Quarter Of The U.S. Could Be In Danger Of “Extreme Heat Belt” By 2053

‘House of the Dragon’: What we know

What people are saying about the #1 Netflix movie in the...

Random: That Guy Playing The Switch OLED In His Hallway Is...