Lionel Messi appears to have finally admitted Barcelona has wasted his prime. Messi reportedly told the Camp Nou club he wants to leave on Tuesday, via fax. The timing is perfect for the greatest player of his generation to find a new home.

The Guardian’s Sid Lowe reported Messi informed Barca of his decision to move on. Lowe also detailed the potential legal battle over a clause in the player’s contract:

Worse, a clause in his contract allows him to walk away for free so long as he communicates that decision. Barcelona believe that the deadline for that clause to be applied has expired: he had to inform them of his decision before the end of May. But given the exceptional nature of this season, which extended into the summer and did not formally end until last Sunday’s Champions League final, Messi’s camp are set to argue that the deadline should be set on 31 August.

A protracted scrap is worth the hassle if it helps Messi join a club with ambition and a coherent strategy. Barca hasn’t had much of either in recent years, failing to win a trophy in the 2019/20 season, despite Messi’s enduring brilliance demonstrated in the video below.

Messi has the support of teammates past and present, including former captain Carles Puyol, to leave the club he’s represented his entire senior career.

Those connected to Barca know why Messi has been failed for so long.

Too Many Mediocre Managers

Embattled president Josep Maria Bartomeu has overseen one shambles after another. Among the many bad decisions made by those in charge has been hiring a succession of mediocre managers.

There have been two basic requirements to sit in the Barca dugout. The first is a previous career as a player for the club, while the second seems to be an uninspiring track record as a manager elsewhere.

Since Luis Enrique won the treble in 2015, it’s been one second-rate gaffer after another. Ernesto Valverde never had the full backing of fans, while Quique Setien was a lightweight appointment back in January.

Setien got the boot following the 8-2 humbling at the hands of Bayern Munich in the Champions League. 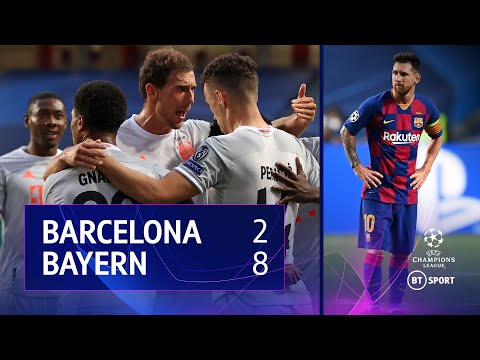 Barcelona’s idea of an encore was replacing Setien with Ronald Koeman, another former player who has been a middling manager.

Koeman was an elegant, ball-playing sweeper and scorer of the decisive goal when Barcelona first won Europe’s top prize back in 1992. Yet the Dutchman has rarely managed in the same bold way he played.

Instead, Koeman has been conservative and pragmatic during stops with Ajax, Valencia, and Everton, among others. He’s a journeyman in managerial terms and hardly the marquee name to make Messi believe in a new project.

Messi’s Trailing Ronaldo Where It Counts

Average signings have also contributed to Messi lifting the Champions League just once since 2011. His great rival, Cristiano Ronaldo, has lifted the famous trophy four times in the same timeframe, giving him five in total, compared to Messi’s four.

Messi is the more complete player, equally creative as he is prolific, but Ronaldo has the hardware that counts. He’s also had stronger supporting casts. Ronaldo won for managers Carlo Ancelotti and Zinedine Zidane, playing alongside Luka Modric, Sergio Ramos, and Karim Benzema.

Meanwhile, Ousmane Dembele, Antoine Griezmann, and Arturo Vidal haven’t been able to match Messi’s magic. Long gone are the days when he was supported by Xavi Hernandez, Andres Iniesta, and David Villa.

Messi knows he needs to surround himself with better to beat Ronaldo’s trophy haul.

Sam Bourgi edited this article for CCN.com. If you see a breach of our Code of Ethics or find a factual, spelling, or grammar error, please contact us.

The ‘Andor’ penultimate Season 1 episode reminds us there are many...

PM Johnson: There is every prospect of a U.S. trade deal