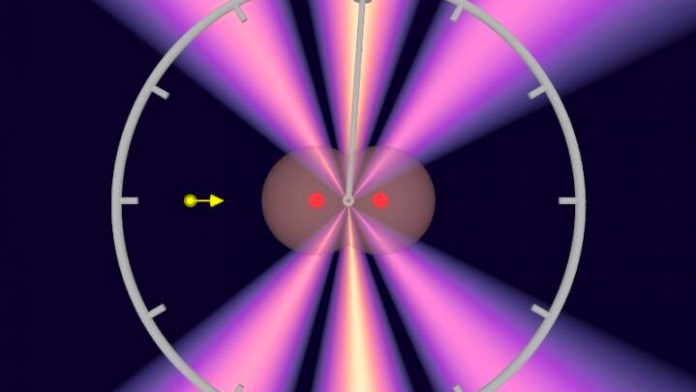 A particle of light, called a photon (yellow arrow), produces electron waves out of an electron cloud (grey) of a hydrogen molecule (red: nucleus). The result of those interactions is what’s called an interference pattern (violet-white). The interference pattern is slightly skewed to the right, allowing researchers to calculate the time for the photon to get from one atom to the next.

Scientists have measured the shortest unit of time ever: the time it takes a light particle to cross a hydrogen molecule.

That time, for the record, is 247 zeptoseconds. A zeptosecond is a trillionth of a billionth of a second, or a decimal point followed by 20 zeroes and a 1. Previously, researchers had dipped into the realm of zeptoseconds; in 2016, researchers reporting in the journal Nature Physics used lasers to measure time in increments down to 850 zeptoseconds. This accuracy is a huge leap from the 1999 Nobel Prize-winning work that first measured time in femtoseconds, which are millionths of a billionths of seconds.

It takes femtoseconds for chemical bonds to break and form, but it takes zeptoseconds for light to travel across a single hydrogen molecule (H2). To measure this very short trip, physicist Reinhard Dörner of Goethe University in Germany and his colleagues shot X-rays from the PETRA III at Deutsches Elektronen-Synchrotron (DESY), a particle accelerator in Hamburg.

The researchers set the energy of the X-rays so that a single photon, or particle of light, knocked the two electrons out of the hydrogen molecule. (A hydrogen molecule consists of two protons and two electrons.) The photon bounced one electron out of the molecule, and then the other, a bit like a pebble skipping over the top of a pond. These interactions created a wave pattern called an interference pattern, which Dörner and his colleagues could measure with a tool called a Cold Target Recoil Ion Momentum Spectroscopy (COLTRIMS) reaction microscope. This tool is essentially a very sensitive particle detector that can record extremely fast atomic and molecular reactions. The COLTRIMS microscope recorded both the interference pattern and the position of the hydrogen molecule throughout the interaction.

“Since we knew the spatial orientation of the hydrogen molecule, we used the interference of the two electron waves to precisely calculate when the photon reached the first and when it reached the second hydrogen atom,” Sven Grundmann, a study coauthor at the University of Rostock in Germany, said in a statement.

That time? Two hundred and forty-seven zeptoseconds, with some wiggle room depending on the distance between the hydrogen atoms within the molecule at the precise moment the photon winged by. The measurement is essentially capturing the speed of light within the molecule.

“We observed for the first time that the electron shell in a molecule does not react to light everywhere at the same time,” Dörner said in the statement. “The time delay occurs because information within the molecule only spreads at the speed of light.”

The results were detailed Oct. 16 in the journal Science.

Editor’s note: This story was updated to correct the value of the zeptosecond. It is a decimal point followed by 20 zeros and a 1, not 21 zeros.

Study: 1 to 2 million tons of US plastic trash go astray

Admin - October 31, 2020 0
Choose your subscription Trial Try full digital access and see why over 1 million readers subscribe to the FT For 4 weeks receive unlimited Premium digital access to the FT's trusted, award-winning business news Read more Digital Be informed with the essentialnews and opinion MyFT – track the topics most important to you FT Weekend…