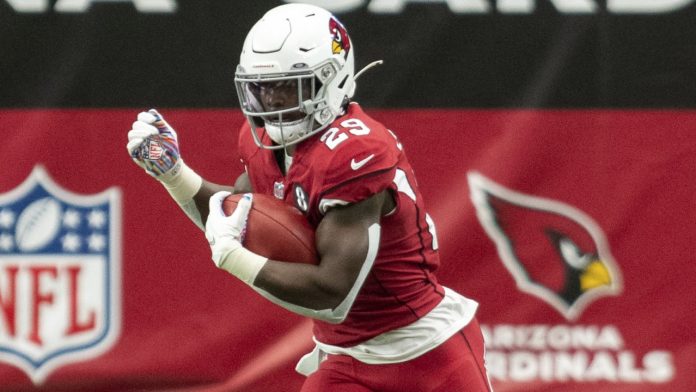 There are four teams on bye this week, with three of them ranking in the top seven in points per game. Why is that important? Because we are going to be without a lot of notable fantasy players this week, making sleepers more important than ever so far this season. The running back position is being hit hard this week and if you need to look to your bench or perhaps waiver wire to find a starter, ﻿Chase Edmonds﻿ is an option for you. Edmonds has a favorable matchup against the Cowboys, who have allowed the fifth-most rushing yards per game to RBs this season (126.2). But the matchup is just part of it, as Edmonds has been seeing more opportunity as of late. He played a season-high 45% of the snaps last week. He has seen at least six targets and five catches in each of his last two games. ﻿Kenyan Drake﻿ has six targets on the season. Edmonds scored 20 fantasy points and has topped 15 in two straight games., Drake hasn’t scored 15 fantasy points in a game this season. This game has the potential to be one of the higher scoring matchups this weekend and if that is the case, it could mean Edmonds sees another six-plus targets this week. It’s getting to the point where he is looking like the top fantasy option in Arizona’s backfield.

Fitzpatrick is currently the QB7 on the season (QB10 in points per game) and has scored over 21 fantasy points in four straight games. That includes throwing for over 300 in three of those games. He threw multiple TDs in three, as well. This week, he faces a Jets defense that allowed over 26 fantasy points to Josh Allen and ﻿Kyler Murray﻿ this season. The Jets have already allowed eight passing TDs and two rushing to QBs and Fitzmagic has been on one of his classic hot streaks. Ride the hot hand and get top 10 QB production out of him this week.

Cousins and the Vikings get the gift that is a matchup against the Atlanta Falcons. The Falcons have allowed over 29 fantasy points to a QB in three games this season. In the other two games, they gave up 21 fantasy points to ﻿Teddy Bridgewater﻿ and nearly 29 fantasy points combined between ﻿Nick Foles﻿ and ﻿Mitchell Trubisky﻿. On the season, they have allowed the most fantasy PPG to QBs (30.14) and are tied for most passing TDs allowed (15). Cousins is not someone to start weekly, but this week he is in play.

Never thought you’d see ﻿Leonard Fournette﻿ in a sleeper column, huh? After missing Week 4 and then being an emergency option and playing one snap in Week 5 has many forgetting about Fournette. ﻿Ronald Jones﻿ has been balling out and looking like a weekly RB2 with upside. But Fournette had seen 16 and nine touches in the two games before getting injured, so he will likely still have a role this week, if healthy. He can do damage even on limited touches, as the Packers have allowed the second most fantasy PPG to RBs this season (35.8). He is more a RB3 or flex option this week, but the upside is there.

Moss has now missed three straight weeks with a toe injury, but he’s been getting in limited practices in recent weeks and this week was upgraded to full. He should be good to go this week against the Chiefs and that makes him a sleeper. The Chiefs have allowed the 10th-most fantasy PPG to RBs this season (27.86). On the year, they’ve allowed the fourth-most rushing YPG to RBs (126.4) and are giving up six catches per game to backs. ﻿Devin Singletary﻿’s snaps dropped in Week 5 even with Moss inactive and the Bills just have not looked comfortable making him a bell cow back. Moss will have a role, particularly in the passing game and near the goal line, this week. Moss is a player you may even be able to nab off the waiver wire and get into your lineup.

Do not give up on Swift just yet. I think he is a sleeper with the Lions sitting at 1-3 and coming off their bye. If there was ever a time to stop giving carries to a 35-year-old back and start feeding your second-round pick, it is now. Swift is already the pass-catching back here, leading them with 16 targets. We’ve seen the Lions dabble with Swift near the goal line. The carries are the last piece of the puzzle. This week he faces a Jaguars defense that is allowing over 28 fantasy PPG to RBs (eighth most in nfl). He is more a deep league flex option right now, but try to acquire him before Sunday.

﻿Sammy Watkins﻿ is sidelined with a hamstring injury, which should open up more opportunities for Hardman. In three career games without Watkins, Hardman is averaging over 10 fantasy PPG. But his upside is clearly much higher than that. He has scored a TD in two straight games and we know the field-stretching abilities he has and that he can have a nice fantasy day off one long catch alone. This is also a better matchup than you probably realize. The Bills secondary is not what it was last year. They rank in the middle of the pack in fantasy PPG allowed to WRs after being one of the toughest last season. They’ve also allowed a top 12 WR in three straight games. This matchup could be a high-scoring affair, too, which typically leads to more pass attempts. Hardman is a WR3 for me that you can nab off the waiver wire in many leagues.

After sitting in single digits for each of the first four games, Williams broke out, scoring over 20 fantasy points, racking up four catches for 106 yards and a touchdown. The Dolphins also used him more as a downfield threat, as he had three targets of 20-plus air yards last game, matching the number he had in the first four games combined. It is important to remember that Williams tore his ACL in Week 9 last year and him getting eased back into things was discussed prior to the season. He can build off his big Week 5 against a Jets defense that is allowing nearly 190 yards per game to receivers (eighth most in nfl). Williams is a borderline WR3 or flex option this week.

Patrick last played on Thursday night in Week 4, which at this point feels like ages ago. So, you may have forgotten that he went off for six catches, 113 yards and a touchdown on seven targets. That came with ﻿Brett Rypien﻿, but Patrick is tied for the second-most passes from ﻿Drew Lock﻿ as well this season. This week he faces the Patriots and last season that would have been an automatic sit. But this year the Pats are allowing over 39 fantasy PPG to WRs, which ranks 11th in the nfl. Last year, they allowed the fewest fantasy points. They have also allowed the second-most fantasy PPG to teams’ leading receivers this season, which just so happens to be Patrick for the Broncos. He is an option for those having to dive a little deeper and if the other two receivers listed above are not available.

Smith Jr. played 69% of the snaps and ran 31 routes in Week 5, both season-highs. He also had five targets, four catches and 64 yards, all season-highs. It couldn’t come at a better time as the Vikings match up against the Falcons, who have allowed the second-most fantasy PPG to TEs this season (21.32). That includes a league-leading seven touchdowns allowed to the position. With the uptick in work last week and a favorable matchup this week, Smith is my favorite sleeper tight end. He is widely available in nfl.com leagues and if you are looking to replace a ﻿Darren Waller﻿, ﻿Jared Cook﻿, ﻿Hunter Henry﻿ this week, Smith is the option for you. I would also use him over struggling options like ﻿Tyler Higbee﻿, ﻿Hayden Hurst﻿ and ﻿Rob Gronkowski﻿.

Here is a bonus sleeper tight end for you! Ebron has seen his usage increase as of late and he has six-plus targets and five catches in two straight games. This week he faces a Browns defense that has allowed the sixth-most fantasy PPG to TEs (17.56), including nearly 62 yards per game and four TDs allowed to the position. The uptick in usage and matchup makes Ebron a streaming option this week.

It’s strange to pick a defense that is facing a team putting up the third most PPG (32.6), but ﻿Dak Prescott﻿ will no longer be slinging the ball. This is ﻿Andy Dalton﻿’s first start with the Cowboys and while I have confidence in him to keep this offense afloat long term, I do want to see him prove it first. Plus, the Cardinals defense has been tough, allowing the fifth-fewest PPG (20.4) and picking up 14 sacks already. If you miss out on the top streaming defenses in Miami or Washington, Arizona is a sleeper for you.