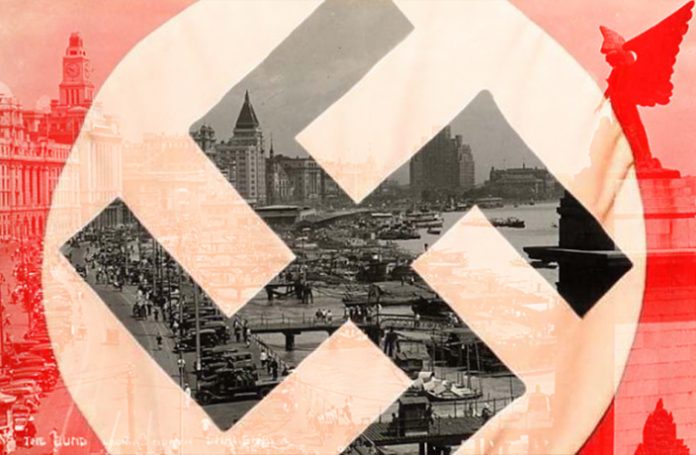 As the winds of war gathered menacingly throughout Europe and across the Pacific, Hitler’s Third Reich extended its odious apparatus to the farthest outpost in the East… Shanghai. The Nazis were everywhere in Old Shanghai – in the clubs, in the streets and on the Bund. They were a monstrous collection of careerists and criminals, perverts and parvenus, fanatics and fakirs, gauleiters and goons. This is their story…

Though not a Nazi, Tai Li, Chiang Kai-shek’s chief of secret service, was one of the most feared men in pre-Liberation China, and his department – the benign-sounding ‘Military Bureau of Investigation of Statistics’ – could, according to Allied intelligence, “legitimately be compared to the Gestapo, on which no doubt it has been modeled.”

Tai, who the Allies dubbed ‘the Himmler of China,’ was the Generalissimo’s “eyes, ears, and dagger.” Although he didn’t subscribe to Nazi ideology, Tai was fond of party rhetoric, particularly the term ‘liquidation.’ He once bragged to an American officer that his “boys” – which numbered 70,000 at the height of his powers – “could bump off anyone they wanted in any part of the world.”

He was known to despise foreigners, particularly the British, but ‘befriended’ scores of foreign officers on both sides of the war. Tai’s disarming personal charm disguised a sinister character – his poison lab was well-stocked and his torture repertoire included ancient methods like the ‘water cure’ (where water is repeatedly forced down the victim’s throat via a funnel until the stomach reaches bursting point).

Not only was Tai’s bureau deadly, it was probably the best intelligence organization in Shanghai – his extensive network observed practically all correspondence between foreigners in Shanghai. Tai Li was killed in mysterious circumstances. He is believed to have been assassinated in an engineered plane crash by a rival Guomingdang agent.

Click here for more in our Nazi Shanghai series

“The Way Things Could Have Been” – Living Through A Shattered...