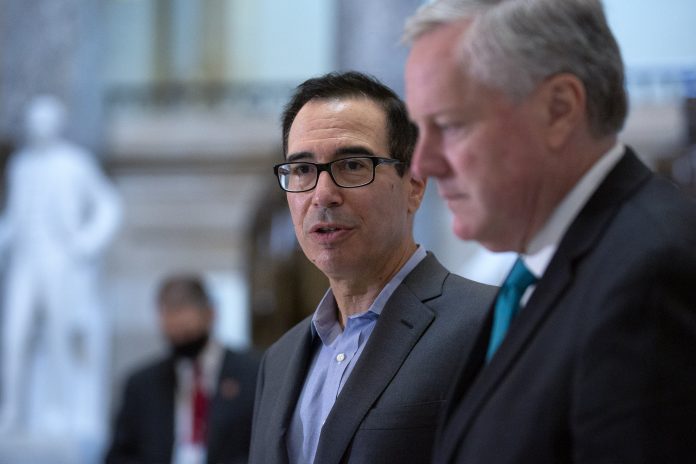 Treasury Secretary Steven Mnuchin told CNBC on Monday that lawmakers should not allow fears over the size of the nation’s deficit or the Federal Reserve’s balance sheet to delay additional covid-19 relief.

Mnuchin, who with White House chief of staff Mark Meadows has led the administration’s covid-19 relief negotiations, said the economic crisis warrants extraordinary stimulus from Congress and the Fed.

“And I think both the monetary policy working with fiscal policy and what we were able to get done in an unprecedented way with Congress is the reason the economy is doing better,” he added.

Mnuchin’s comments critiqued his fellow Republicans who argue that improving jobs data and strong housing figures relax the need for additional spending to combat the impact of the coronavirus.

Sen. Rand Paul, R-Ky., for example, voted against a GOP “skinny” stimulus plan last week and has repeatedly attacked his own party for what he views as prodigal spending.

“The majority of Republicans are now no different than socialist Democrats when it comes to debt,” Paul wrote on Twitter in July. “They simply don’t care about debt and are preparing to add at least another trillion dollars in debt this month, combined with the trillions from earlier this summer.”

The cumulative federal budget deficit for the first 11 months of fiscal year 2020 was $3 trillion, according to the Congressional Budget Office, a byproduct of intensified government spending to get the economy through the pandemic-associated shutdown.

Mnuchin, who argues that more stimulus is needed to help the U.S. economy, said Monday that “we are rebounding in a very, very significant way.”

Paul’s vote helped sink the Senate Majority Leader Mitch McConnell’s plan, which fell short of the 60 votes needed on a procedural step to move toward passage.

All Democrats present and Paul voted against the bill in a 52-47 vote. That legislation would have reimposed enhanced federal unemployment insurance at a rate of $300 per week, half of the $600 weekly payment that expired at the end of July. The Democrats said it didn’t go far enough.

“I think there’s many areas of this where is an agreement between the Democrats and the Republicans, and some of the areas we do have differences on the amounts,” he said. “But I will continue to work on this: I’ve told the speaker I’m available any time to negotiate.”

The 60 Most Unique Gifts for Men to Receive This Father’s...