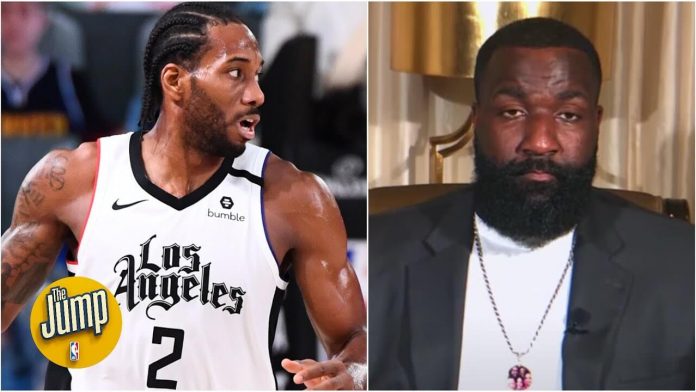 That was fast. Paul George has probably barely furnished his LA home before rumors of a Clippers’ breakup have started swirling.

But that’s what happens when you’re expected to win an nba championship and get knocked out in the second round by a pair of NBA newbies.

The most logical recourse for the Clippers would be to run it back and take the next regular season more seriously. But some people are claiming that the Clippers are already looking for a big shakeup.

During a recent segment on ESPN’s “The Jump,” Kendrick Perkins claimed he had “inside information” that the Clippers, as we know them, are finished.

As seen in the video above, Perkins claimed:

The Clippers are gonna break this up. Whether you like it or not. I heard from an inside source, they are going to break this up.

And although he doesn’t say it, he likely means that they will trade Paul George. They’re not trading Kawhi Leonard. Even though he had a monstrous game seven performance against Denver, Kawhi is their only proven champion, and he’s, by far, the team’s best player.

George does not have the type of killer mentality, or perhaps even the skillset, to complement Kawhi. Now various publications are pushing out trade rumors for the former Indiana Pacer. As for Perkins, check out his opinion of George:

Wrong – Don’t disrespect Dwight like that. He’s a future hall of famer and one of the most dominant forces this league has ever seen and deserves a statue in Orlando! Paul George? Not a chance in hell! https://t.co/qaKfiyRZA1

But if the Clippers do decide to break this up, what trades make the most sense?

Both of these contenders are in desperate need of a shakeup. Philly needs more shooting and defense, and the Clippers need a quality center. Both teams get what they need. Paul George and Lou Will would fit excellently around Ben Simmons.

Joel Embiid and Kawhi Leonard would give the Clippers a top-five defense on the court, not just on paper. LA might have to sweeten the deal with a draft pick, but this one makes some sense.

Paul George Stays in the Bubble

In this scenario, Orlando gets some much-needed space in the middle and extra playmaking in George and Williams. Vucevic isn’t as big of a name as Embiid, but he’s been an excellent floor-stretching big over the last few years. Check out these highlights:

Aaron Gordon would fill in the extra wing-defense lost by George’s departure. If Orlando could find themselves a more dynamic point guard, they could make a deeper playoff run next year.

The Most Embarrassing Option

Could you even imagine? Paul George goes back to Indiana because nobody wants him. Worse, he’s traded for the same player that he was traded for when he left. It seems highly unlikely, but Oladipo is coming off a nasty injury, so the Pacers might want to hedge their bets.

If Oladipo is healthy, he and Turner would fill out the Clippers’ defensive-minded roster in an emphatic way. And Kawhi would get another closer in Oladipo.

Sam Bourgi edited this article for CCN.com. If you see a breach of our Code of Ethics or find a factual, spelling, or grammar error, please contact us.

Boeing Is the Latest Company to Escape a Hostile Business Environment

Jane Fonda Wishes She Cheated on Her Husband – And I...