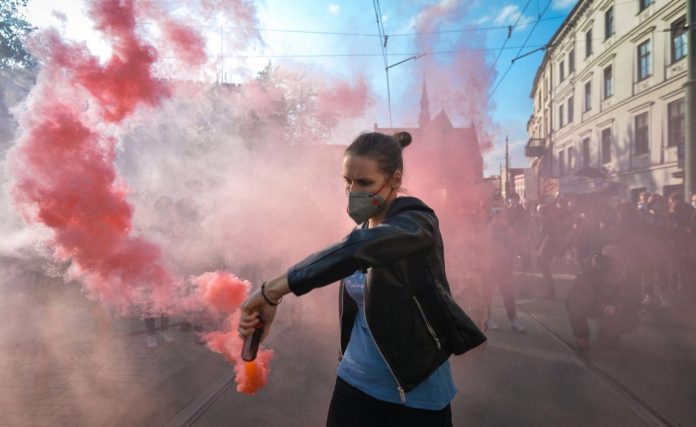 Poland’s anti-abortion laws have always been among the most restrictive in Europe. Until this week the procedure was only permitted when the pregnancy posed a threat to the woman’s life; if there was a fatal fetal abnormality or in cases rape or incest.

However on Oct. 22 the country’s constitutional court ruled that a fatal fetal abnormality was not justification for terminating a pregnancy and violates the constitution. For the over 10 million women of reproductive age in Poland, this ruling effectively puts in place a complete ban on abortion.

According to official data, just over 1,100 legal abortions are performed annually in Poland–98% of which are in cases of fatal fetal abnormalities. The procedure prevented further pain and suffering for both the woman and the fetus.

While the court’s ruling has not yet come into force, many Polish hospitals have already stopped carrying out terminations. Women with scheduled procedures are having their appointments canceled. Women with a diagnosis of fatal fetal abnormality are not being provided with information and don’t know where to find help, left alone with their tragic news. At the Federation for Women and Family Planning we are getting calls from men asking for help for their wives or partners. The women are often so devastated they are unable to speak.

We try to support them as much as possible and there are some doctors who support them too. After our campaigning some hospitals have again begun to perform abortions but it is only a drop in the ocean of what is needed.

The ruling is an outrageous violation of women’s human rights. Women are being treated like living incubators. We do not have any rights, not even the fundamental human rights guaranteed by the Polish Constitution: the right to health, the right to private life, the right to equal treatment.

Not one word was said in defense of women during the debate. The fetus, called the “conceived child,” has the rights of an already existing life. During the Tribunal’s debate the most cruel statement was that we cannot “kill a conceived child” just because its birth would “reduce the comfort of a woman’s life.”

Forcing a woman to give birth to a child with severe, irreversible conditions is cruelty. Whether or not to keep the pregnancy should be the decision of the woman, or the woman and her partner. They will be the only ones to bear the traumatic consequences of this decision.

The politicians of the ruling party in Poland allowed the politicized Tribunal to issue what is a cruel and shameful decision. They hoped that the pandemic and the ban on public gatherings would prevent women from protesting. But they were wrong. Since Oct. 22 thousands of women have been protesting all over the country in hundreds of large cities, small towns and villages.

We will not stop fighting for our fundamental rights. Three out of four Poles are against tightening the laws on abortion and against the Tribunal’s ruling, and over 60% are in favor of further liberalizing Poland’s abortion laws. The court issued their judgment without any social legitimacy. The abortion law should have been proceeded in the Sejm, the lower house of parliament, and not arbitrarily imposed by a few men in judge’s clothes, many of whom were former MPs and politicians from the ruling party.

We will not stop fighting for women’s rights, for the right to a legal and safe abortion, the same rights that other European women have. Making abortion illegal will not reduce the number of procedures, research shows. The ban only endangers women’s lives and health. Women without access to money and information, often from smaller towns and villages, will end their pregnancies in dangerous ways, on their own or by unsafe underground abortions. This is what we fear most. We are going to do everything we can to prevent this from happening and are in contact with foreign abortion clinics that are ready to to provide services to Polish women.

If even one woman is harmed by an unsafe abortion, we will hold the Polish state accountable. This week there was a general strike by Polish women. We walked out of work, and many employers supported the women and protested with them. We will continue to protest, and we will fight to the end.

Sign up for Inside TIME. Be the first to see the new cover of TIME and get our most compelling stories delivered straight to your inbox.

For your security, we’ve sent a confirmation email to the address you entered. Click the link to confirm your subscription and begin receiving our newsletters. If you don’t get the confirmation within 10 minutes, please check your spam folder.

Less is more… and more is coming By Cointelegraph

Hamilton: Racing for Ferrari in F1 “just wasn’t meant to be”