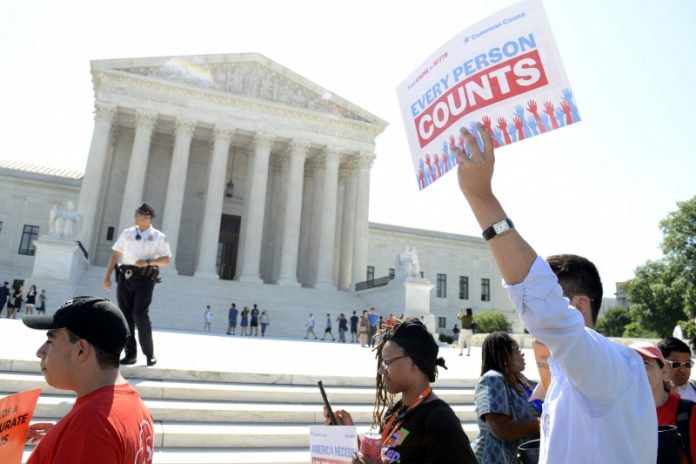 U.S. House districts are re-drawn every 10 years based on population results from the U.S. Census.

The proposal could cut the number of members of the U.S. House of Representatives, along with federal funding, for states, such as California, Illinois and Texas that have large immigrant populations.

The Supreme Court will hold a hearing by Nov. 30 to fast-track an appeal based on Trump’s July 21 memo which declared that the executive branch had the authority to “exclude from the apportionment base aliens who are not in a lawful immigration status under the Immigration and Nationality Act.”

A three-judge District Court panel in New York on Sept. 10 blocked Trump’s order with an injunction, after the Trump administration was sued by the American Civil Liberties Union.

The panel declared the presidential memorandum to be “an unlawful exercise of the authority granted to the president by statute,” but stopped short of saying the memo was unconstitutional.

“President Trump has repeatedly tried — and failed — to weaponize the census for his attacks on immigrant communities,” said Dale Ho, director of the ACLU’s Voting Rights Project. “The Supreme Court rejected his attempt last year and should do so again. The legal mandate is clear — every single person counts in the census, and every single person is represented in Congress.”

About 11 million undocumented immigrants are believed to live in the United States.

Trump has campaigned against so-called “sanctuary cities” and has repeatedly threatened to withhold federal funds from municipal governments that provide services to undocumented residents.

Even if the courts did validate the president’s order, it is unclear how the number of non-compliant immigrant residents in any state could be calculated. A citizenship question did not appear on the 2020 U.S. Census after the Trump administration lost a legal challenge last year.

Democrats and the ACLU fear that a Supreme Court with a conservative majority might overturn the lower court’s ruling, which could cut the number of congressional members to immigrant heavy states, as well as federal education and health resources.

The Supreme Court will likely have a full nine members by Nov. 30, as the Senate plans to confirm Judge Amy Coney Barrett to the highest court on Thursday, which could give the court a 6-3 conservative majority.

The Trump administration’s lawyers argued that the Supreme Court should fast-track their appeal because the president must submit the new census congressional apportionment numbers to Congress by January.

The Trump administration was successful in a push to end the census a month early when the Supreme Court issued a temporary ruling last week.

For Fazoli’s, Technology is a Family Affair