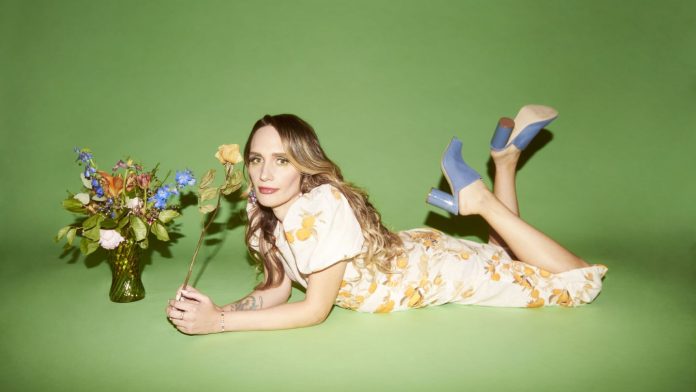 Sadie Dupuis and a fellow poet were looking for ghosts. Rooming at the same supposedly haunted hotel, they took photos and stayed up until 4 a.m., but found nothing. It wasn’t until the next day that Dupuis — a vocalist and guitarist for Speedy Ortiz, who performs solo as Sad13 — came across a presence in Seattle’s Frye Art Museum. She was immediately obsessed with it.

It was a portrait of the dancer Saharet by Franz von Stuck. Dressed in green, a red flower in her hair, Saharet appears benign at first. But after a moment, you notice the dark circles under her eyes — a stark contrast to her very red lips and intensely pale skin. The utter weariness of those circles adds a hyperrealistic depth, a whisper of sorts: She’s seen something. This portrait primarily inspired Dupuis’s new album, Haunted Painting, out September 25.

While a painting is tethered to one moment, to call it haunted imagines an entire life behind it. Haunted Painting is much the same. Beneath a veneer of synth pop, bubbly beats, and deft lyricism hides loss, mental health struggles, and environmental disasters.

“When my dad passed away in 2015, I basically went right back to work: I had a record that was about to come out, and I was in a shocked state of grief — not in denial about it, but not really ready to process it,” Dupuis tells MTV News. “I remember doing a big interview the day after the funeral. I remember going to SXSW maybe two weeks later, going on tour for most of the next two years, and not really sitting with that or processing it … I just kept creating work for myself so I could be working all the time and not have to deal with my mental health.”

That’s particularly clear on “Good Grief,” where she bemoans the distance between them, singing, “I’m taking the loss best I can.” Dupuis wrote the song while he was still alive, as a way to say, “I’ll be OK, Dad!” but unfortunately, he passed before she completed it.

Death and grief haunt these songs. Dupuis recorded two of Haunted Painting’s tracks — “Good Grief” and “Oops…!” — at New Monkey, the Van Nuys, California studio of deceased singer-songwriter Elliott Smith; one of Dupuis’s musical heroes, he’s the first whose passing she remembers. It was after that studio session that, stuck in a 22-hour layover at LAX in August 2019, she heard of the death of David Berman, a musician and poet, best known for his band Silver Jews. From this compounded grief came “The Crow,” a creeping track with arresting, gritty guitar interludes and jarring lyrics: “The future just confounds me / He’s dead, I’m drinking at Taix / Faint-hearted bottle blond hiding out ‘til the smoke just passes.”

“While the record’s about grief, it’s also partially about having to reconcile with the fact that love is not enough to keep people with you all the time, and your heroes can make beautiful art but that doesn’t mean they’re going to be here forever, and trying to learn to understand and cope with those kinds of losses,” Dupuis says.

Haunted Painting also reckons with the loss of Dupuis’s friends to drug overdose. Specifically, in 2019, three of her friends died within a couple weeks of each other; she found this reactivated OCD symptoms she hadn’t experienced since childhood. She explores this resurgence on “Ruby Wand,” perhaps her most lyrically direct work, orchestrated with mathematical synths she feels echo her experiences with OCD. As she sings “I need control,” the song explodes into cacophony; she compares it to musical theater.

“My own OCD symptoms are very much about wanting control and wanting to do homework for things that aren’t homework, just to have a place for my brain to focus,” Dupuis says. “A very over-the-top, guitar-heavy, out-of-control moment feels like what it’s like to go through these intensely obsessional, invasive fixation periods when things feel out of control.”

And it’s not just death and loss that are out of her control. Dupuis also reckons with the climate crisis on “WTD?” and misogynistic, offensive comedians on “Hysterical.” She challenges: “You’re in it for the fight, right? / You clamor for the gore / You can’t hide that lust anymore.” It’s a world’s worth of outrages packed densely into the album — all that keeps it from bursting is Dupuis’s careful attention to language, fitting words like “mellifluous” and “febrile” in her songs so seamlessly that neither the emotional takeaway nor the accessibility of the music itself are interrupted.

But despite its ghosts, Haunted Painting can be ecstatic. “With Baby” is a glittery track that hinges on “kissing the hero in the photo booth.” In the music video for “Oops…!” Dupuis is a saccharine vampire dressed in her mod best, baking with blood; in “Hysterical” she watches nonchalantly, ordering a pizza, as her friends are murdered by ghosts over video chat, her YouTube sidebar exclusively populated with Wallace Shawn.

These splashes of humor, especially in the “Hysterical” video, are essential in maintaining balance and levity among grief. And it’s so clear in Dupuis, the person, too: Merch for the album has ranged from your standard vinyl to a haunted hot sauce, haunted breakfast tea, and haunted hazelnut spread.

In part, she gets to make such silly, winky products because on this album, Dupuis is fully in control of everything from production to promotion. She’s releasing Haunted Painting herself through indie label Wax Nine. While she finished mixing the album in December, she did say that “the slowing down that is a necessary byproduct of being in a global emergency has made me look at different aspects of the release cycle in a way that’s special.” For example, she plays nearly every instrument on the album — that makes livestreams an interesting challenge.

While she’s not sure if she’ll write deeper into this grief in the future, environmental and economic disasters are still top of mind. “WTD?” was inspired by an article she read about “housing in the ocean that would be impervious to rising sea levels, obviously for the uber wealthy — [I felt] anger at the idea that the benefactors of huge industries that are causing the greatest impact to our climate will be the first to be able to colonize another part of not only our planet, but also space.” After all, these issues are ongoing.

“While it’s a nice utopian fantasy to imagine a world where we’re not constantly working against so much,” she laughs wryly, “I imagine that’s probably too optimistic.”

But don’t read Dupuis as pessimistic, either. In “Good Grief” she sings to her father, “Anytime I make a big sound, that’s when I feel you.” Haunted Painting serves in many ways as a memoriam, but it’s also a tribute to the memory of those lost, and a commitment to keep moving forward.

12 Celebrities That Had Ordinary Jobs Before They Became Famous

12 Celebrities That Had Ordinary Jobs Before They Became Famous

How to get free Fortnite Creative Mayhem cosmetics (2022)