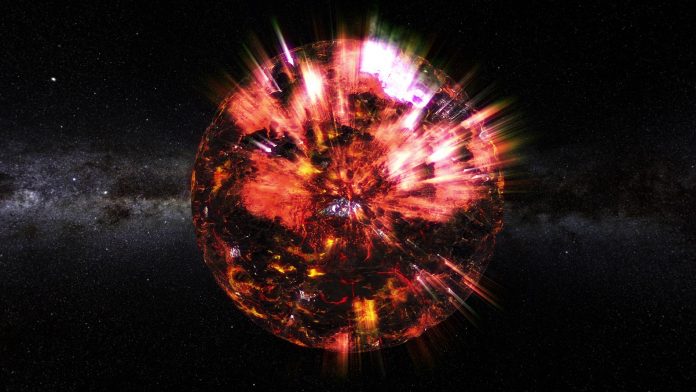 Neutron stars are among the densest objects in the universe.

Neutron stars are the angry ghosts of giant stars: hot, whirling cores of exotic matter left behind after supernovas. Like thermoses filled with hot noodle soup, it takes eons for them to cool down. But now, researchers think they know how these stars do it: with a giant helping of pasta.

No, these ultradense stellar corpses aren’t filled with spaghetti. Instead, neutron stars cool down by releasing ethereal particles known as neutrinos. And the new study shows they accomplish that task thanks to an in-between type of matter known as nuclear pasta, a ripply, coiled material in which atoms almost, but don’t quite, mush together. This nuclear pasta structure creates low-density regions inside the stars, allowing neutrinos, and heat, a way out.

Related: 8 ways you can see Einstein’s Theory of Relativity in real life

A teaspoon of matter scraped off a neutron star’s surface would weigh billions of tons, more than every human being on Earth combined. That density helps them trap heat extremely well. And while our sun, which is considered a yellow dwarf star, releases most of its heat in the form of light, light particles produced inside a neutron star rarely make it to the surface to escape. Still, these raging undead stars — each about the size of an American city — do eventually calm down, mostly by emitting neutrinos.

To understand how they cool down, the researchers of a new study, published Oct. 6 in the journal Physical Review C, took a closer look at the matter inside neutron stars.

Ordinary stars are made up of conventional matter, or atoms: tiny balls of protons and neutrons surrounded by relatively huge whirling clouds of electrons. The interiors of neutron stars, meanwhile, are so dense that atomic structure breaks down, creating a vast ocean of so-called nuclear matter. Outside of neutron stars, nuclear matter refers to the stuff within atomic nuclei, dense balls of protons and neutrons. And it is governed by complex rules that scientists still don’t fully understand

Pasta is what lies between conventional matter and nuclear matter.

“Pasta is something intermediate between nuclear matter and conventional matter,” said study co-author Charles Horowitz, a physicist at Illinois State University “If you start squeezing matter really, really hard in a neutron star, the nuclei get closer and closer together and eventually they start to touch,” Horowitz told Live Science. “And when they start to touch, weird things happen.”

At some point, pressures rise high enough that conventional matter’s structure collapses entirely into undifferentiated nuclear broth. But just before that happens, there’s a region of pasta.

In the pasta zone, Coulomb repulsion (the force that pushes charged particles apart) and nuclear attraction (the force that binds protons and neutrons together at very short distances) start to act against one another. In regions where the nuclei touch but atomic structure hasn’t broken down entirely, matter contorts into complicated shapes, termed “pasta.” Scientists have words for the different varieties of this stuff: gnocchi, waffle, lasagna and anti-spaghetti.

“The shapes really do look like pasta shapes,” Horowitz said.

Scientists have known for most of the last decade that this pasta lies inside neutron stars, just beneath their crusts in the region where conventional matter transitions into bizarre, poorly-understood nuclear stuff. And they also knew that neutrino emissions help cool neutron stars. The new study shows how the pasta helps free neutrinos.

Study lead author Zidu Lin, a postdoctoral researcher at the University of Arizona, designed a series of vast computer simulations that showed how neutrinos might emerge in this uncanny environment, Horowitz said.

The basic formula for producing a neutrino in a neutron star is straightforward: A neutron decays, transforming into a slightly-lighter, low-energy proton and an ultralight neutrino. It’s a simple process known to occur elsewhere in space, including in our sun. (Right this second, a vast stream of solar neutrinos is streaming through your body.)

Related: The 12 strangest objects in the universe

But conditions have to be right for this recipe to work. And in a neutron star, conditions look wrong.

Neutron stars, as the name implies, have plenty of neutrons, all zipping around at high energies with lots of momentum. But the neutrino recipe requires producing a low-energy proton with almost no  momentum. Momentum can’t just disappear though. It’s always conserved. That’s Isaac Newton’s First Law of Motion. (It’s also why if your car stops suddenly and you’re not wearing a seatbelt you go flying out the window.)

Featherweight neutrinos can’t take on all the momentum of relatively bulky decaying neutrons. So the only other place for momentum to go is out into the surrounding environment.

Dense, rigid nuclear matter is a terrible place for dumping momentum though. It’s like driving a sports car at high speed into a thick slab of granite; the rock will hardly move and the car will pancake as that  momentum has nowhere else to go. Simple models of neutron star emissions struggle to explain how nuclear matter could absorb enough momentum for neutrinos to escape.

Lin’s model showed that nuclear pasta solves much of this problem. Those coiled, layered shapes have low-density regions. And the pasta can compress, absorbing momentum in a rippling motion. It’s as if that granite wall were mounted on a spring that compressed upon the car’s impact.

This research, Horowitz said, does suggest that neutron stars cool more slowly than expected. That means they live longer. Histories of space-time will have to be tweaked, he said, to account for their uncanny persistence at extreme heat across eons.

Study: 1 to 2 million tons of US plastic trash go astray