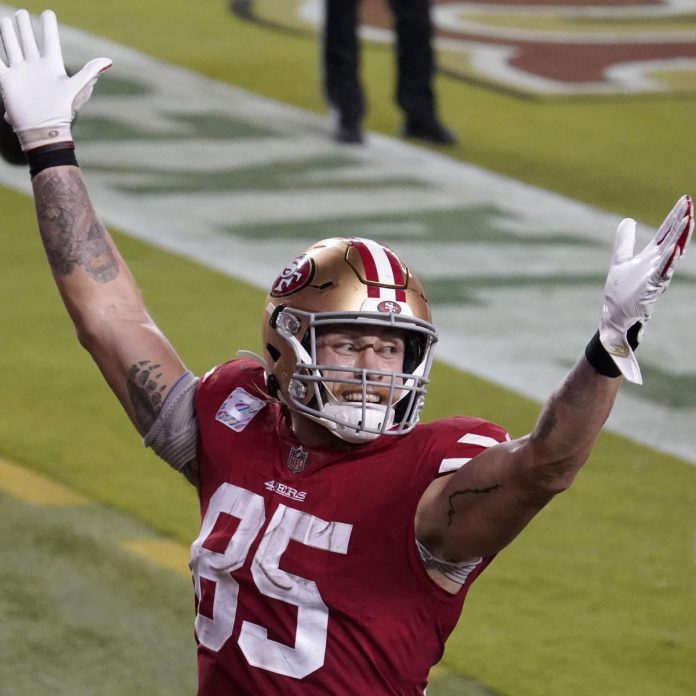 The San Francisco 49ers are expected to receive a jolt to their offense with Jimmy Garoppolo returning under center.

Garoppolo’s return from injury could be marked by a heavy connection with tight end George Kittle, who is coming off one of the best games of his career.

The 49ers are one of a few teams that could take advantage of favorable matchups in the passing game to land a Week 5 victory.

The Carolina Panthers could fit that category as well for their matchup with the Atlanta Falcons, who have conceded points at a concerning level through four weeks.

Teddy Bridgewater and Robby Anderson have formed a solid connection over the last few weeks, and they could use the confidence gained from the Week 4 win over Arizona to hurt Atlanta’s passing defense Sunday.

Picks against the spread in bold.

Kittle took full advantage of his Week 4 matchup with Philadelphia by catching all 15 of his targets for 183 yards and a touchdown.

In his two games this season, the San Francisco tight end pulled in all but one of his 20 targets for a catch.

On Sunday, he faces a Miami Dolphins passing defense that is one of nine units to allow a completion percentage over 70.

With Garoppolo easing back into game speed, Kittle should be a constant target of the team’s top quarterback.

Since the start of the 2019 campaign, Kittle has 11 performances with six or more receptions. He also has more than 70 receiving yards in four of his last five games.

If Garoppolo links up with Kittle on a regular basis, he could exploit the middle of the Miami defense and post yet another high receiving total.

Anderson has established himself as the top wide out in the Carolina offense through four weeks.

The former New York Jets player opened his Carolina career with back-to-back 100-yard outings and was one yard shy of a third triple-digit total in Week 4.

Anderson received his highest target total of the season against Arizona, as Bridgewater threw in his direction on 11 occasions.

He could produce at a high volume in each stat category Sunday against an Atlanta defense that has conceded the second-most passing yards in the nfl.

Additionally, the Falcons let up 13 scoring plays through the air, and that could persuade you to take Anderson at +145 to score a touchdown as well.

As long as he receives the same amount of attention from Bridgewater, Anderson should eclipse his projected yardage total.

What Will A Bitcoin ETF Mean For Adoption?

Edgar: T.J. Dillashaw needs a win before he fights for the...